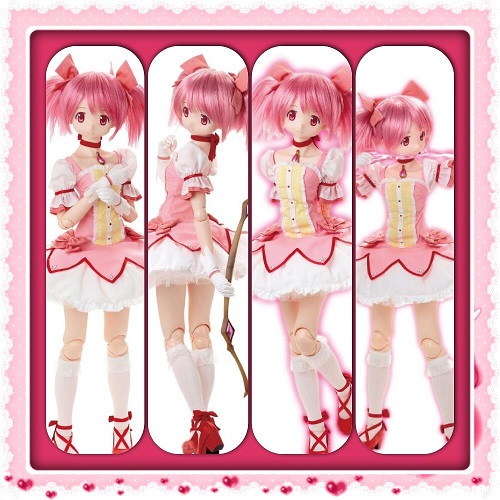 name: Madoka Kaname (?? ??? Kaname Madoka)
mold/company: Azone LE Madoka Magica
size: MSD
age: 14
sex: Female
usual wig color: Pink
usual eyes: Red
relationship status and preference: Single
favorite color: Pink
likes: Being a Magical Girl, hanging out with her friends
dislikes: Being a Magical Girl, her friends getting hurt
any other info: Madoka came to me on 10/4/2013. (The following is taken from WIKIPEDIA) Madoka is a 14-year-old girl who comes from a loving family. Her life changes when she encounters the magical girl Homura and the familiar Kyubey, who offers to transform her into a magical girl. She sees herself as a person without special qualities or talents, and after seeing Mami fighting against witches, aspires to become a magical girl like her. She is a kind and gentle person that is averse to fighting. She hopes that the magical girls will support each other, sometimes even putting her own life at risk to help them. After witnessing Mami's death, she grows uncertain about becoming a magical girl, growing ever more hesitant as the true cost of the role is revealed to her.
In previous timelines, Madoka became a magical girl in a pink dress wielding a rose-topped bow and arrow. In the Drama CD titled "Memories of You," it is revealed that her first wish was to save a cat named Amy from death. You can see Madoka holding Amy in the opening sequence. However, every time, she was either killed or transformed into a witch named Kriemhild Gretchen, one that became ever more powerful with each time reset centered around her fate. In the current timeline before the final episode, Kyubey claims that Madoka has a god-like potential for magic. The reason for this is unclear, since her life so far has been relatively average and free of tragedies. This is later revealed to be due to her accumulated misfortune, which was caused as a result of Homura repeatedly resetting time, with Madoka's fate seemingly getting worse with each timeline, with her simultaneously growing in magical power. Prior to the time resets, she starts out as a magical girl with only average power. However, by the current timeline, she has the potential to be the most powerful magical girl to date. Towards the end, she finally learns of this and Homura's efforts to save her. After being shown the suffering of magical girls throughout history, Madoka decides upon her wish: she contracts to prevent them from becoming witches when they are at their limits. The laws of the universe are rewritten such that at the moment that a soul gem becomes black with anguish, Madoka appears and purifies it before the magical girl passes on. As a result of this wish, she becomes an omniscient savior that exists for all time, leaving only Homura with the memory of her human existence.
Belongs To: Sailor Moon/KittiePink