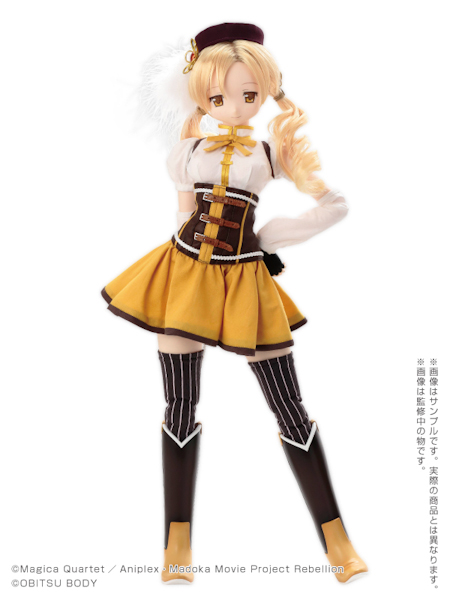 name: Mami Tomoe
mold/company: Azone LE Madoka Magica Mami Tomoe
size: MSD
age: 14-15
sex: Female
usual wig color: Yellow
usual eyes: Yellow
relationship status and preference: Single
favorite color: Yellow
likes: Being a Magical Girl, hanging out with her friends
dislikes: Being a Magical Girl, her friends getting hurt
any other info: Mami came to me on 12/30/2014. (The following is taken from WIKIPEDIA) A ninth-grader who attends Mitakihara Middle School. A kind senior to Madoka, she’s the helpful, sisterly type. She lives alone in an apartment after her parents died in a car accident. Mami first appears as an older, more experienced girl, and is one of the first magical girls introduced in the series. She is shown to have feminine tastes, such as drinking tea and dressing with flower clips in her hair and bows on her shoes. She has a strong sense of personal justice, which keeps her on the path of helping innocents despite gaining little reward for it. This sense of justice also makes it difficult for her to team up with other magical girls for more than short periods, as many will only fight witches for the chance of finding a Grief Seed or in self-defense, and many others are against teaming up with their "competition" in hunting witches. These circumstances compound with her lonely nature as an orphan who has trouble making friends at school due to her having little time for much outside of witch hunting, which has turned Mami into a very isolated person looking for friends. She has been shown to take the harsh truths of the magical girl system quite badly depending on the circumstances, and at times has proven to be unstable and dangerous when confronted with them. Mami always uses honorifics and calls people by their surname with the honorific '-san'. This shows her age and emotional distance to the other girls, who are younger than her and closer in age to each another.
Belongs To: Sailor Moon/KittiePink